SATURN does his rounds of the twelve Rashi’s of the Zodiac once in about 30 years. In the process, he is supposed to stay for about 2 ½ years, in each sign of the Zodiac, before moving into the next. Saturn was in Libra for nearly 2 years and ten months from 2nd November 2011 to 21st October 2014 except for a short foray into Scorpio between 3rd February and 1st April 2014. Saturn leaves Libra, and also its exaltation status, finally to move into Scorpio on 21st October 2014. 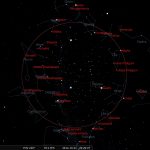 What Does Your Nakshatra Say About You? – Dhanishta NakshatraBlog