A rough ruby gemstone is nothing special when the gem is just raw and maybe embedded into a crystal.

But ruby gemstones become very precious when they have the right red color, not many inclusions the right size and cut. Actually a ruby of a size bigger than about one centimeter by about 8 millimeters is very valuable if clarity and so so called “pigeon blood” red color is right, the value of the gemstone rises exponentially with every millimeter more. Many bigger gemstones are even more rare than a diamond, that’s the reason they can fetch higher prices than a diamond of similar size and quality.

Excellent ruby jewelry is also quite expensive when the ruby stones are right. Loose ruby gemstones are easy to find at Mogok, Myanmar, the world capital of ruby gem mining, its easy to find ruby gems there and a raw ruby. Many are gem quality ruby for beautiful ruby jewelry. Smaller rubies are also traded at the Bogyoke market in Yangon Myanmar every day. There is a lot of business with ruby jewelry and ruby gem there. Buy ruby is the idea at the open market between the covered blocks.

Most ruby gemstone shops in Myanmar are in Yangon Bogyoke market,

there are also several jewelry shops elsewhere in Yangon city in particular placed in the Yangon hotels and some ruby shops are at the gem museum in Yangon. Also elsewhere in Myanmar you always can find a ruby for sale. Buying rubies in Myanmar is for sure the best at Yangon at the places indicated above, if you are a adventurer you could travel to Mogok and buy some rubies directly from the mine, the problem is how to determine the quality and how to get the right paper for legal export, don’t try illegal ruby gem export. If they catch you, very likely, even if the stone is quite small, you go to prison and this is real bad. Myanmar prisons are some of the worst in the world, your health is worth more.

Ruby gemstones have been mined for about 10,000 years, maybe more.

In certain cultures, supernatural power have been interpreted into ruby stones, some even thought the red color came from fire inside the stone. Ancient Hindus believed that rubies could make water boil, and early Greeks thought the crystals could melt wax. After a diamond a ruby is the next hardest. In other cultures (Myanmar or Burmese and Native American), it was commonly believed that a ruby was protecting a person who wear it because of its blood-like color and naturally also as ruby jewelry .

A ruby is sometimes of high value, sometimes of low value, and sometimes a fake stone, very popular in Thailand via heat treatment. Synthetic rubies are another version mainly used in industrial application, laser and watch bearing. Until recently rubies were mainly mined in Myanmar – Burma. Since this market slowly dries up, it is very difficult to get real good rubies of a bigger size from Myanmar.

But ruby rings are still in high demand  most of the time together with some diamonds. 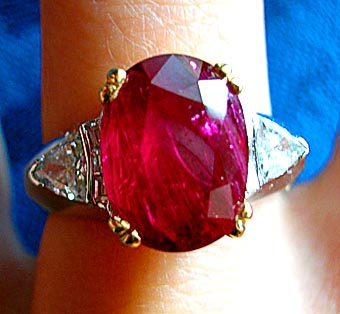 Promising sources for rubies are developed in Madagascar by investors from Thailand and elsewhere. Madagascar has a similar situation like Myanmar – Burma, tumbling from one problem into the next for decades.

That means all kind of gemstone hunters come  to find some valuable gemstones, not only ruby. Madagascar’s soil contains plenty of precious stones and semi precious stones such as sapphire, emerald, amethyst, aquamarine, garnet rhodolite, tsavorite, peridot, blue and pink sapphire, tanzanite, tourmaline and other. Quartz, marble, bauxite, fluorine and dolomite are other valuable resources hidden in the deep.

The hunt is after a natural ruby and there are always people who try to find ruby gems all over the world. Using new exploration methods and cutting edge technology they are quite successful.

Most of ruby gemstones in Madagascar

are ‘harvested’ the artesian way. There is a lack of investment capital in Madagascar due to the political instability -a small clan with strong connections to France run the country. France is one a strongest supporter of  Africans looting their country. Lebanese have most of the legal and illegal precious stones business in west Africa under their control. In Madagascar the ruling clan on power controls almost everything which brings money via export.

A ruby is not only a beautiful gemstone, it also be considered a very high and long lasting investment since the ruby resources are dwindling on planet earth. In recent years only in Madagascar new ruby mines opened and their output is very little because of only minimal investment into ruby mining.

A ruby ring could be considered to be a very good solution when you want to do your darling something real good, beside of the other stuff. About rubies much has been said bet this is eternal true.

Resources of Myanmar precious ruby gemstones are not exploited at large scale and practically no downstream  business in this market is done locally. That means the real money with all kind of ruby jewelry, such as rings, ruby earring, necklaces and ruby gemstones is done at the gem dealer side. A pendant would also be not so bad and there are many variants.

Mogok in central Myanmar is somehow the center of ruby mining.

Mogok is about 120km north of Mandalay in central Myanmar and is the main mining area for Myanmar rubies. A Mogok ruby is well known in the as a great gem.

Mogok is almost a synonym for ruby, gem market and ruby mining in Myanmar – Burma.

Beautiful Mogok Lake lies in the centre of town, with a hotel on a silt island and around. The area around the Chanthargyi Pagoda on a small hill provides a great panorama of Mogok Town, the lake and the surrounding hills.

The people in Mogok are a showcase of the ethnic minorities in Myanmar – Burma. All kind of tribes like Lisus, Shans, Gurkhas, Kachins, Bamars, Chinese, Shan are there and try to get their share of the ‘ruby cake’. Read more about Myanmar ruby here.